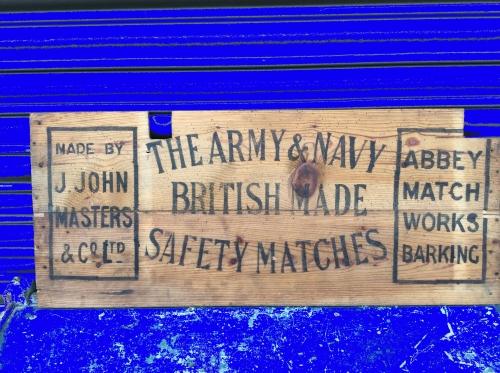 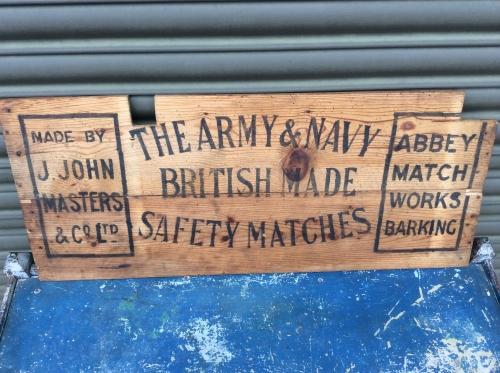 Raw Industrial chic! This vintage piece of signage is actually part of an old wooden crate from the J John Masters Factory - the Abbey Match Works of Barking. The matchworks were established at the turn of the 20th century, possibly on the site of Barking Abbey, and operated under various names but certainly by J John Masters and Co from at least 1919. There are no traces of the factory left, but there is a local area known as Matchstick Island.

An authentic small piece of the heritage of Industrial London, this original Eastender is pretty beaten-up (two small chunks have been cut out of it at some point - check the photos), shows signs of age and even has authentic woodworm holes, which have been properly treated/severely dealt with in our workshop.

It has an interesting personal history too as it was a fixture for many years in the studio of Ian Homer Walters, renowned 20th century sculptor and socialist, best known for his statue of Nelson Mandela in Parliament Square, as well as his busts of Harold Wilson and Barbara Castle.

Authentic Industrial street-cred anywhere you wish to perch or hang it.

Fill in this form to email this item to a friend

Fill in this form to send us your enquiry

Can we also interest you in these?